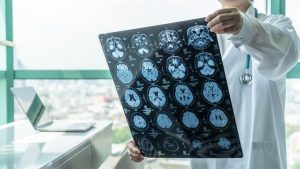 Depression is a serious, complicated condition affecting 264 million people worldwide. It’s the leading cause of disability, and women are twice as likely as men to suffer the chronic feelings of sadness that put people at a very real risk of suicide. Now, researchers at the University of California San Francisco believe a “pacemaker for the brain” may be a successful treatment for those with severe depression.

UCSF doctors implanted a small device in a woman’s brain that continuously monitored neurological activity. When leads attached to the device detected abnormal brain activity, it emitted electrical pulses to two separate areas of the brain. Doctors say the “pacemaker” delivered near immediate relief from severe depression that was resistant to other conventional treatments. What’s more, the effects of the deep brain stimulation lasted for 15 months, making it superior to other therapies, which offered relief for only for 4 to 8 weeks.

Next up, new, larger trials of 3, then 12 patients. Doctors hope to investigate brain circuitry on a larger scale, and map “depression” brain signals and patterns, a process that so far has proven elusive. Still, similar electro-convulsive therapies have eased the effects of epilepsy, bipolar disorder, and Parkinson’s. So, there’s hope this discovery will be a gateway to more effective and safe treatments that don’t require anti-depressants with side effects like muscle twitches, seizures or irregular heartbeat.

Learn more at: https://www.ucsf.edu/news/2021/09/421541/treating-severe-depression-demand-brain-stimulation and watch a video at https://www.youtube.com/watch?v=XCY8uQr2LKo