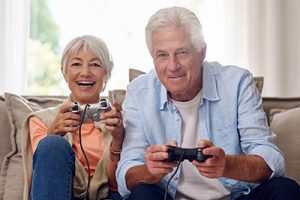 If you don’t know Luigi, Princess Peach, Red or Chuck, time to make some new virtual friends. If you already play ‘Super Mario Brothers” or “Angry Birds,” keep it up! Turns out, both games are really good for aging brains.

Researchers at the National Institutes on Aging found gaming can benefit cognition and memory for older adults. Scientists tested the performance of people aged 60 to 80, who played either video game for 30-45 minutes a day for 4 weeks. After just 2 weeks of playing “Angry Birds,” participants remembered things better. It took 4 weeks for the same improvements to show up for those who played “Super Mario.”

Researchers believe the 3-dimensional stimuli from the games – sound, pictures and motion – stimulate the hippocampus, the cerebellum, and the prefrontal cortex. Those parts of the brain control memory, decision-making, balance, and motor control. Scientists believe the games actually “grow” gray matter, which can shrink when one’s brain isn’t stimulated by sound, light, or motion.

By the way, you aren’t the only older person playing video games. AARP found almost half of its members over age 50 play video games at least 5 hours a week. You don’t have to learn how to use a console either. The benefits of gaming came from versions played on phones, PC’s, laptops, tablets and virtual reality headsets.

You can also benefit if you play videogames with friends or family. Lots of research backs the social component of gaming together. You don’t have to conquer the Mushroom Kingdom, or the Flock, to think and remember better. Simply playing is good enough.