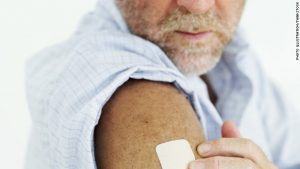 Researchers at Vanderbilt University have launched a massive, long term study, hoping to determine if nicotine can be effective for treating early memory loss if its removed from toxic hosts like cigarettes. Doctors are cautious, saying they don’t expect nicotine to be a “home-run” cure. Nevertheless, they also believe the patches stand a good chance of being an effective, affordable way to help mitigate early symptoms of Alzheimer’s. In a study of 74 non-smoking patients with early signs of memory loss, those who got nicotine through a patch showed improved memory and attention after 6 months of therapy. In addition, nicotine treatment appeared safe, didn’t cause many side effects, and didn’t trigger addiction in patients who used it successfully.

So, why does nicotine seem to help? Put simply, scientists say nicotine imitates the function of a key neurotransmitter, which allows our brains to function better. New studies are now underway to study the effects of nicotine patches on 300 patients over 2 years.

We will keep you posted on those findings.