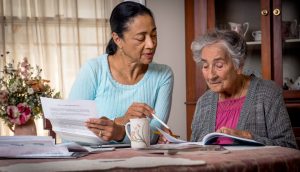 It’s October – National Hispanic Heritage Month. By the numbers, Latinos are more at risk for Alzheimer’s than any other racial/ethnic group in the United States. Surprised? Experts at the National Institutes of Health estimate there will be 3.5 million Latinos with Alzheimer’s by the year 2060.

Older Hispanics, those over age 65, seem especially vulnerable. They are one and a-half times more likely to have Alzheimer’s that older whites. 1 in 3 Hispanics don’t’ believe they will live long enough to get treatment. What’s more, 1 in 3 Hispanics also believe discrimination keeps them from getting care. That’s compounded by findings that show Hispanics are much less likely than whites to see a doctor if they experience thinking or memory problems. Instead, they turn to informal care from family and community members, who may have no medical training. Additionally, Hispanics are susceptible to the effects of poverty, heart disease, high blood pressure, obesity and diabetes, all which make them more likely to develop Alzheimer’s.

Given all of this, both the government and prestigious universities are rolling out new Alzheimer’s awareness campaigns designed to help Latinos stay well, and seek early treatment. Both USC and the National Institutes of Health hope to remove care barriers, support funding for new research, and urge lawmakers to create “Hispanic-centric” public policy.