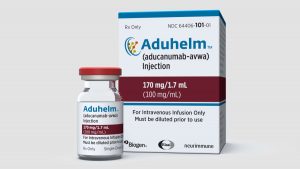 It’s 20 years in the making, but the Food and Drug Administration, over the protests of three advisory board members, has approved "Aducanumab" as the first drug to slow the progression of Alzheimer’s disease.

I told you here earlier this year about the FDA review, which now puts the monitoring of the drug’s true effectiveness in the hands of pharmaceutical giant Biogen-Eisai. It touts Aducanumab, also known as Aduhelm, as an antibody infusion, which successfully breaks up the telltale brain plaques of the disease that now afflicts 6 million Americans. If that’s true, the drug may help slow the cognitive decline of people in the early stages of Alzheimer’s.

Biogen officials and supporters of the drug say it may give “precious” days, weeks, months, even years of active life to those who take it. In one trial before FDA approval, patients who got high doses of aducanumab declined 22% more slowly than patients who did not get this drug. While this is a big step, it's still not a cure for the disease, nor does it reverse damage already done.

There are, however, lots of “buts” attached to this landmark decision. First, not everyone who wants or needs the drug will get it. The only way to tell the condition of a patient’s brain is through expensive scans and spinal taps; blood tests haven't been perfected yet. In addition, the drug is administered every 4 weeks, not in a pill. That means if you can’t get to an infusion center, you may not be able to get treatment. It's also unknown how long the treatment will last. And then, there’s the cost: Aducanumab retails for $56,000 a year. It’s unclear if Medicare or private insurance will cover any of this cost, however Biogen is promising to help patients access the drug. Even so, insurance co-payments could reach $11,500 a year. Finally, there are potential side effects including brain swelling and tiny brain bleeds.

The drug is shipping to 900 sites across the country. If upcoming trails conducted by Biogen fail, the FDA can still withdraw approval. Still, patient advocacy groups back the FDA's current approval. The chief program officer for the Alzheimer’s Association said it signifies “the beginning of a new future” for people living with Alzheimer’s and their families.