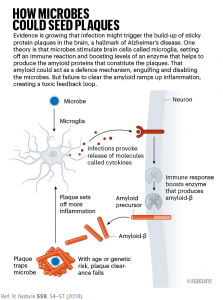 By now, the words “virus” and “bacteria” are seared into our collective minds. They are enemies we all fear in this era of COVID-19. However, if there is a silver lining in this pandemic, it is renewed interest and research into the idea that an infection could be the cause of Alzheimer’s.

Researchers at The University of Oxford and The University of Manchester, in the UK, just published findings that show brain neurons infected with a bacteria called “porphyromonas gingivalis” died, or developed the telltale plaques now associated with the onset of Alzheimer’s. This bacteria, often found in our mouths and linked to gum disease, is present in the brains of more than 90 percent of Alzheimer’s patients.

Meanwhile, a team at the University of Chicago, Illinois found evidence that herpes, or HSV-1, could be a trigger. Researchers theorize that herpes may hibernate in our bodies until stress or a damaged immune system reactivates the germ. It attacks the brain’s natural defense mechanisms, and allows the build up of those incredibly damaging plaques. Moreover, the process may only take 3 days. What’s unclear is what other factors interact with the infections, whether they be co-existing or genetic.

Nonetheless, scientists are forging ahead with drug trials that treat those with Alzheimer’s and herpes. Some are also exploring the links between Alzheimer’s and COVID, which leads to neurological damage like delirium, depression and anxiety.